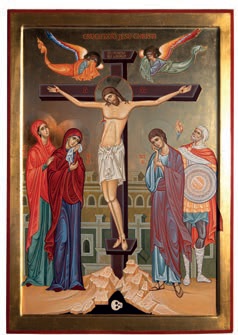 Time of Lent, time to look more at Jesus, to be closer to him, in these few weeks that prepare us to relive his passion, death and resurrection with him. We let ourselves be guided by this icon of the crucifixion.
Behind we have the walls of Jerusalem, as the Gospel indicates: Jesus is killed outside the walls, he is excluded from the center of the religious power of the time, from the city that was the "city of God" par excellence, where the Temple was. He is killed on the mountain "Golgotha", that is "place of the skull", indicated by the skull that is represented in the cave under the cross: it takes on the meaning of the underworld. The skull also refers to the skull of Adam, (according to tradition he was buried right there), the first, the "head" of the whole human race, whom Jesus came to save, to redeem with his death and resurrection. The cross stuck in a rock that breaks, in a ground that opens up. Nature too shares in the immense pain of seeing its creator die.

At the foot of the Cross there are the people who loved him the most. There is her mother Maria, very sad and we could say "crucified in the soul" together with her son for the unbearable pain of seeing him so mistreated, tortured and killed. She holds that handkerchief that is also present in other icons, a cloth that recalls the cloths that wrap the Child, the Man on the Cross and those that remain empty in the tomb. They indicate the inseparability of the Mother with her Son, her complete participation in her life and in her sufferings.
There is Mary Magdalene, in love with her teacher, who will be the first to see him risen, a woman whom love and gratitude for him make intrepid and courageous. There is the apostle John, the youngest of the team, the apostle "whom Jesus loved", the one of all who perhaps understood the infinite love of the master the most.
And then there is also another figure, a "stranger": the Roman soldier, a "pagan" who, as indicated by the white cloth that wraps his head, obtains the grace of conversion, an interior light that makes him understand whoever has before him: “he is truly the Son of God”. These people together indicate the future Church, which under the protection and guidance of Mary, whom Jesus gives us as Mother by giving her to John, includes all the faithful, open to all humanity.

Finally our gaze goes to him, to Jesus, the center of the icon and of the victory over death. Jesus is represented in such a way as to communicate not so much the horror of the tortures he suffered, but his being Son of God, the triumph of his love so great that he offers all that he has and that is and overcomes death itself. Jesus is represented with closed eyes and tears but "serene", as in a "sweet sleep", the luminous color is not that of a corpse but of a living body that emanates light, and the attitude of the body speaks of a Voluntary "gesture", as of a universal "embrace" that Jesus makes to all humanity from the cross ...