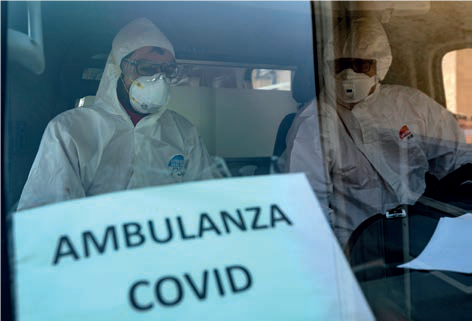 Data from a global survey on the well-being of thousands of people in 26 countries revealed how the pandemic is affecting people's satisfaction with their lives. This is a study conducted by Imperial College London, in partnership with the Sustainable Development Solutions Network (SDSN), YouGov and the World Happiness Report, which includes over 120,000 responses collected in 3 weeks, between April 27 and June 14. . The survey is gathering weekly insights from more than 20 countries, monitoring how public behavior and attitudes in relation to Covid-19 are evolving over time.

To measure well-being, respondents are asked to report how satisfied they are currently with their lives using the so-called Cantril Ladder: individuals are asked to rate themselves on a scale from 0 to 10, where 0 represents the worst possible life and 10 represents the best. The results show that in the West the countries most affected by Covid-19 are generally more unhappy than those with the lowest death rates from the disease. Western countries reporting the lowest levels of life satisfaction include Italy, Spain, the US and the UK, which also have the highest Covid-19 death rates. Certainly not a surprising result. On the other hand, the data relating to trust in the health system is more interesting: in all the countries examined, people who have more confidence in the ability of their health system to respond to Covid-19 also declare higher levels of life satisfaction than those who, on average, they have less confidence in the health system.

Furthermore, the report shows that young people and the unemployed are among those most affected by Covid-19. In particular, young people seem less satisfied with life. This contrasts sharply with data collected before the pandemic, which generally show that life satisfaction follows a U-shaped trend with advancing age: generally higher levels of happiness are found for young and old, while lower levels are observed for middle-aged people. If no gender differences seem to emerge (according to the authors' estimates, men and women are equally satisfied with life), the unemployed show a lower life satisfaction than the employed. The effect of unemployment is about one percentage point, slightly higher than the effect of unemployment estimated before Covid-19.

By comparing the data on unemployment with gender, it emerges that unemployed men declare on average levels of life satisfaction lower than those reported by unemployed women. It should be added that unemployment rates are particularly high for women; a difference that, according to the authors, helps to explain why women are now on average no happier than men, as found in pre-Covid studies. Higher unemployment also contributes to the lower average life satisfaction levels observed compared to other reports collected before Covid-19. The report shows results of aggregated data and it is not possible, for example, to investigate the role that other factors generally important for happiness may have played during Covid-19: type of work more suitable for teleworking, number of children, type of welfare state and childcare policies, the ability of families to connect to the network, social support… Among the many scientific articles on Covid-19, some address the above factors in detail. We just have to wait for the results!