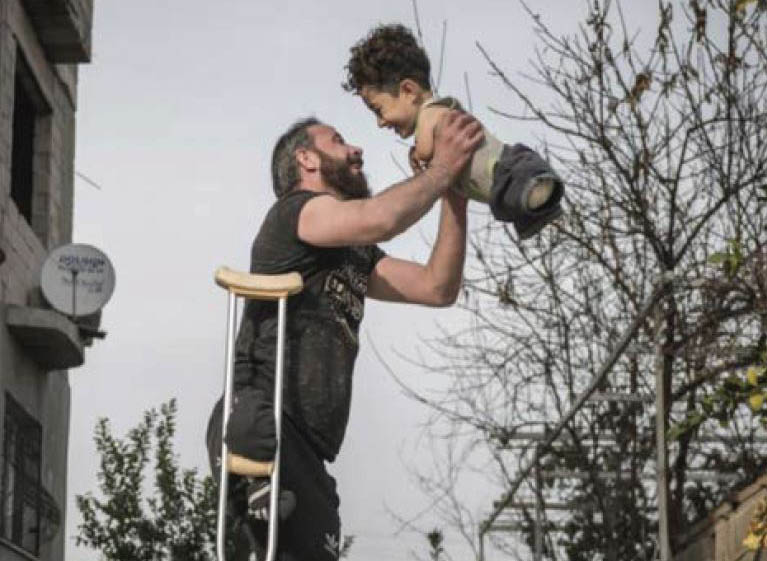 Everything strikes the eye. That direct connection that does not need words, explanations, who knows what concepts. Love is enough, the visceral bond that exists between a father and a son. Just that and everything else disappears. Even if the "rest" is heavy as a boulder.

We are in the Reyhanli district, in the Turkish province of Hatay, a stone's throw from the Syrian border. Munzer El Mezhel is seen, a legless man holding his baby Mustafa, born without legs and arms.
Both victims of war. Munzer is a refugee who arrived in Turkey in 2016, taken away from Idlib after an air attack. That day he was at the market with his pregnant wife, when they were hit by the bombs of the Damascus regime. Survived by a miracle, but marked forever: Munzer mutilated, Mustafa born shortly thereafter, malformed due to the drugs given to his mother to limit the effects of nerve gas. After five years, those wounds still exist, but there is also the tenderness that passes through gestures, feelings, even the happiness of the eyes of a child that never stop getting lost in the eyes of a father.
All in a photo titled Hardship of Life taken by the Turkish photographer Mehmet Aslan, winner of the Siena International Photo Awards.

It is amazing to see how an image is able to fix without rhetoric the madness of war and the innocent pain of civilians which is almost unstoppable. “This photo has reached the world - Mustafa's parents told the Washington Post - we have been trying for years to make ourselves heard to help our son, we have toured every hospital, every village, but we have not achieved anything. We will do everything to give him a better life ».
How many like them! A reality - in Syria alone - of 13 million displaced people, about 60% of the population: 6.6 million refugees welcomed in neighboring countries and 7 million internally displaced persons.
Not just numbers, but very concrete stories, lives that we are almost always unable to visualize, much less to imagine.

A photo can work a miracle, but is it really like that? In the past there have been images that have really stopped time. Among all, that of the desperate cry of Kim Phùc, the child protagonist of the symbolic photo of the Vietnam War: naked, in tears, burned by napalm bombs.
A black and white photo that managed to stir the public opinion of the time, gradually increasing the opposition to an absurd war.
Today everything is more complicated because we are bombarded with always different images, solicitations and inputs.
We live on feelings, but very often on sentimentality. We are moved, but we are almost bogged down in a short circuit that plunges emotions into more or less declared forms of consumerism. The risk is very high because if an emotion does not indicate a path of change, it is useless. Same thing if a tear of emotion does not arouse indignation, an awareness, a firm no that must turn into life choices.

Objection: but what could be done in front of a photo? Surely not to stop there, but to know, to listen, to really learn to put yourself in the shoes of others to go beyond indifference.
Maybe start with the protagonists of Hardship of Life, a photo that should be contemplated, not just seen.