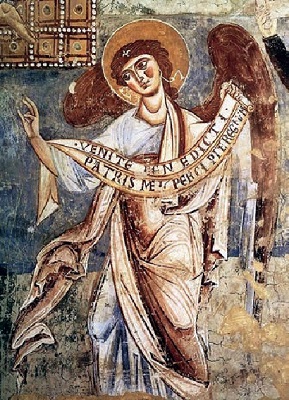 There are topics today that seem taboo. While in other times they have been recurring themes. Let's try to let the iconography take us back a little over a thousand years. And find out what drives an abbot to completely rebuild the church for his monastery and to fill its walls with frescoes that speak of Christ, his Mother, angels, saints and prophets, martyrs, who tell episodes from the Gospel and the ancient will? And the Last Judgment? Certainly an era more "bare" of images, of knowledge, where the circulation of books was very limited .. and where knowledge was handed down verbally ... but also a great faith and a deep desire to pass on their treasures.

The angel in the photo is located in the Benedictine Basilica of Sant'Angelo in Formis, in Capua, Caserta. Of still unknown origins, the earliest records date back to the first half of the 10th century. In 1072 Riccardo, Norman prince of Capua and count of Aversa, after having built a monastery there, granted it to the abbot of Montecassino, Desiderio together with the same monastery. It was this abbot who had the church rebuilt from its foundations and commissioned the frescoes, which would have completely filled the internal surfaces. These frescoes make it a jewel of the "Italian Byzantine", the result of the collaboration between Byzantine artists and local shops, which together manage to render the figures, the expressions of the faces with the characteristic cheeks of a bright red and the dynamism of the gestures with a particular freshness . A truly unique style. To give some examples, observe in the central apse the "flight" of the winged man holding the Word of God (representing the evangelist Luke) who reaches Christ on the throne together with the eagle, and the winged lion and ox representing the other evangelists. The freshness of the colors and gestures of the Baby Jesus in the arms of the Mother, in the small apse on the right.
And again in the episodes of the life of Christ and of the New Testament that are reported, one for all the scene of the adulteress is observed, (already in itself a rare episode in the frescoes, an indication of an original choice by the abbot) and the attitudes of the characters tell the different "amazements" of those present at how Jesus resolved the question by saving the woman. As well as in the very rich cycle of frescoes that is on the counter-façade and depicts the Last Judgment, to which the angel shown in the photo belongs. Above, between the windows, the four angels with the trumpets of Judgment are depicted; in the central band there is Christ the Judge with the apocalyptic almond, among the Apostles seated on thrones; lower down the Blessed, and finally the Damned.

The angel carries the scroll "be blessed by my Father, inherit the kingdom prepared for you since the foundation of the world" as Jesus says in the Gospel of Matthew speaking of the end times ( Mt 25: 31-46). It gives voice to Christ the Judge and tells us that this "judgment" is a judgment of love, which gave life, pain and blood to save everyone, it is the "judgment" of those who he loves and continues to call those he loves "Come", continues to suffer so that they may be saved. Judgment is the love that God the Creator has put into his works, he has put something of him in everyone and this love, this life of him makes it to him. Only those who continue to refuse love in life will come to a time when they will not be able to recognize it, and refusing it once again will be refused, because love does not force anyone to love.
As is well known, these great images had the primary task of doing "catechism", that is, of making the Invisible visible, of helping the faithful to know Christ and his life among us, to understand that the life we ​​live and see that is not all, it is not limited to what we see but there is a Beyond that exists much more than there is this life which in comparison is short and very limited ...
Then the faithful, perhaps poor, illiterate, entering the Basilica, finds himself immersed in a wonder that reveals a Heaven entirely at his disposal, all turned towards him, his life, his family, his people, a Heaven that pours out his love on him, who came to earth to teach him the way to return to him, in the womb of the unique, infinite Love, which has prepared for us true joy, a new kingdom of joy, of peace, of not violence, true communion, wisdom and respect ...