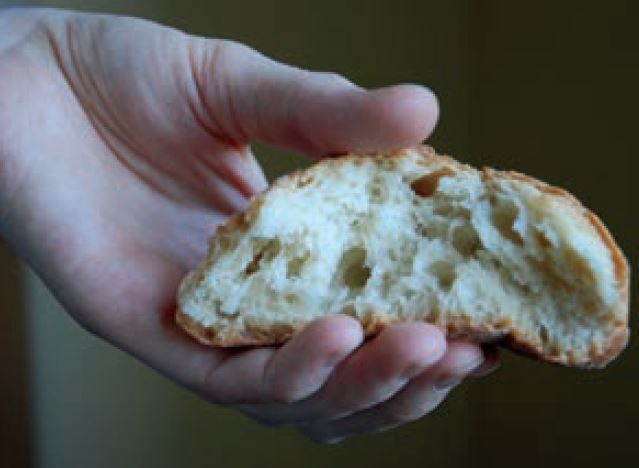 Bread and wine, body and blood. We've been without it for a long time. It wasn't the first time. In the sixth-seventh centuries and up to the threshold of the sixteenth century, in the West but also in the East, for the faithful, receiving communion had become an exceptional event, which took place two or three times a year. Mass was attended as if to a sacred spectacle, the culmination of which was the elevation, contemplated with awe.

At the beginning of Christianity, however, as Saint Justin attests in the second century, the Eucharist for communion could also be taken away and kept in a casket to give to hermits in the desert. Not only. "In Alexandria and throughout Egypt", writes Saint Basil of Caesarea in the fourth century, "every believer can keep the Eucharist with him and, when he wants, give it to himself". We are talking about Basil the Great, brother of Gregorio di Nissa, a close friend of Gregorio Nazianzeno.

One of the three great Cappadocian Fathers. "Since the priest offered the sacrifice and passed the sacrament, whoever once received it in full, when he then takes his share every day, believes, rightly, to continue to participate in the sacrifice and to receive it from the hand of him who gave it to him. The priest in church gives the part that is required of him. Whoever receives it keeps it in complete freedom and brings it to his mouth with his own hand ”.

A reflection of this use survives today in the "antidoron" of the Byzantine rite: it is what remains of the bread consecrated on the altar and distributed in communion. "Doron" is the gift. Real bread, not a host, a fresh bread mixed with flour, yeast, water, sometimes salt, made of two overlapping pieces of dough, a symbol of the two natures of Christ. "Antidoron", instead of the gift: the bread that at the end of the liturgy is brought to those who cannot go to church.

Cyril, bishop of Jerusalem, in the fourth century also tells how the Eucharistic bread was distributed: "When you approach, do not step forward with your hands outstretched or with your fingers apart: make your left hand a throne for the right, which must receive the King and in the hollow of your hand you receive the body of Christ saying: Amen ... So also approach the cup of his blood ... And while your lips are still wet, brush them with your hands and sanctify your eyes, your forehead and your other senses ... ».

The union with the body and blood of the King is physical, material, reminiscent of Christ's gesture to the deaf-mute, the same gesture that the priest makes in baptism by touching the ears and mouth of the baptized: "Effatà", open yourself, listen, breathe the Spirit. To us, instead, a host, sometimes with a moldy taste, not consecrated during mass, extracted from the tabernacle. What strength would the symbol take with good fresh bread, perhaps dipped in wine! As the Eucharist would say to our senses what it really is: intimate communion with God, sacrament of the Presence, entrance into the joy of the Lord.