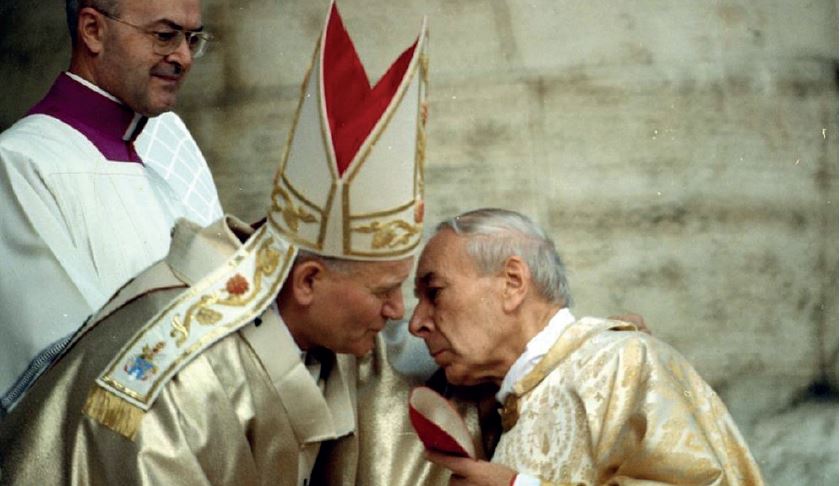 Cardinal Stefan Wyszynski (1901-1981) has been blessed since 12 September. He led the Polish Church for 33 years, from 1948 to his death, as archbishop of Gniezno and Warsaw and primate of Poland. In 1978, on the death of Pope Luciani, he accompanied his successor to Rome, the archbishop of Krakow Karol Wojtyla: he himself will convince him to accept the election. And John Paul II will say, inaugurating the Petrine ministry: "On the See of Peter there would not be this Polish Pope, who today full of fear of God, but also of trust, is starting the new pontificate, if it had not been for your faith, who did not bow before prison and suffering, your heroic hope, your trust to the full in the Mother of the Church ».

The embrace between the two remained memorable: when Wyszynski pays homage to the new pastor of the universal Church, trying to kneel, he gets up and hugs him, with gratitude, affection, devotion.
The primate dies a few days after the attempt on the pope on May 13, '81.
John Paul calls him on the phone, from Gemini, and he asks and gets the last blessing.

"God united these two people not only through the same faith, hope and love, but also through the same human events, which have linked both of them so strongly to the history of this people and of the Church that lives in it" . Years later, Pope Benedict XVI, on a visit to Poland, will say so.
Wyszynski was more than a cardinal.

For decades he has represented the soul of Catholic Poland, semper fidelis. Tested, but not crushed, in the twentieth century, by the two greatest dictatorships of all time, first the Nazi, then the Communist. The primate will be the symbol of resistance to both, first as a young priest, then as a bishop and cardinal. From 1953 to 1956 the Communist power arrested him and he locked up in prison. Because he cannot bear that voice, free and powerful, which comforts, animates, protects his people, keeps the faith alive and fights the battle for freedom. God and the Black Madonna of Jasna Gora, in Czestochowa, the only comforts in captivity.

They free him, so as not to make him a martyr. But he already is, and he will lead the Polish Church until the victory of Solidarity, being able to see the first signs of liberation and defeat of the communist regime. And accompanying the disciple to the throne of Peter.
Now I'm up there, Karol and Stefan.
In the infinite embrace of the saints.