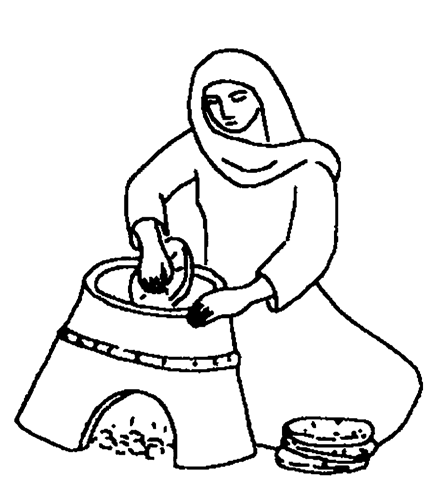 How did our ancestors live? how did they spend their time? what was more important to them and what less? These are fundamental questions in archaeological research, which can be answered with field work and the scientific study of the findings. So what was the life of the Jewish tribes like in the Iron Age (between 1,200 and 1,000 BC)? In the Canaan area, systematic archaeological research since the 1980s has made it possible to draw an accurate picture. The settlements, preferably located in high areas, were relatively small, at most 400 inhabitants. These small villages were devoid of fortifications, as they were part of larger political units and related to the main city (like Shechem).

The extended families lived together, often in groups of houses arranged around a central courtyard, built with raw bricks, which in some cases also had a second floor in wood. Inside the houses consisted of 3 or 4 rooms, including a common bedroom in a more sheltered position and a shelter for animals, such as sheep or goats. The diet consisted mainly of cereals, lentils, beans, barley and millet. Recent excavations at the Tell Halif site in the Negev have shown that the main area of ​​the house was dedicated to food preparation. In 2015, a group of students led by Dr. Cynthia Shafer Elliott created a tannur, an oven for baking bread, right on this site. The experiment began with the collection of local earth, rich in clay, used, mixed with straw, to build the walls of the oven. The circular oven was built over several days, in concentric rings, to allow the earth to dry slowly. After the complete drying of the mud walls, a fire was lit inside the oven and it was possible to cook the dough, made with flour, water, yeast and a little sugar. «We were all pleasantly surprised by the good functioning of the tannur and the good taste of the baked bread!», Commented Dr. Shafer Elliott at the end of the experiment.