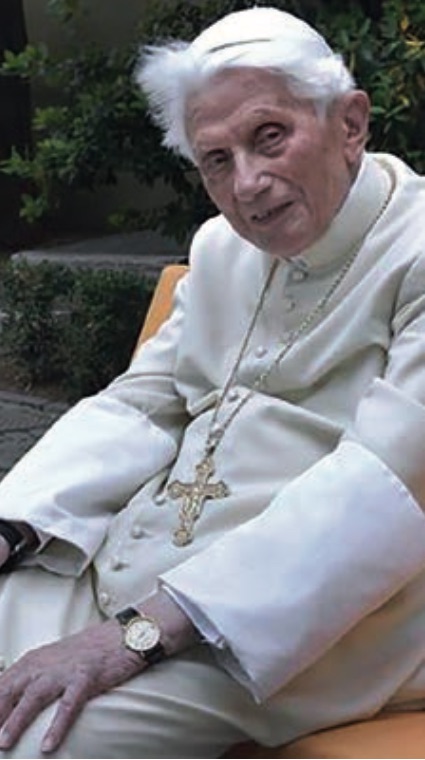 In the secluded silence of a cloistered convent - Mater Ecclesiae - within the Vatican gardens, the days of Joseph Ratzinger, Pope Emeritus Benedict XVI, are consummated. Small and fragile, a faint voice, the effort to move, a hint of a smile. The heart full of God. Waiting for the meeting, which knows not far away. 93 years, a long life spent following the demanding following of her Lord. Up to the seat of Peter, to continue a story of two thousand years. Vicar of Christ: the highest title, the heaviest cross. Thus, on the death of the great predecessor, now a saint of the Church, John Paul II, the Pope who came from a distant country, Joseph Cardinal Ratzinger accepted the weight and glory of the pontificate, taking on the pain and splendor of the earth. And for eight years he sowed the Gospel, the white dress and the white hair, in Rome and everywhere in the world. Suffering serenely insults, insults, betrayals, scandals. Suffering for the Church and with the Church, in a time of great trials. Eventually, his strength failed him.

After having prayed for a long time - who knows those face-to-face dialogues with the Lord, who knows the words, the thoughts, the tears, the stabbing questions - after reflecting and consulting with friends, Benedict decided, took the definitive, painful and serious: get off the seat of Peter. It hadn't happened for centuries. «Someone had said that I had come down from the cross - he will tell - that I had made myself comfortable. It is a reproach that I should have expected, with which I had had to deal especially while meditating on that passage. I am convinced that it was not an escape, and certainly not a renunciation due to external pressures, which did not exist. But it was not even a question of an interior flight from the demands of the faith that leads man to know the cross. Instead, it is another way to remain tied to the "suffering" Lord, in the stillness of silence, in the greatness and intensity of prayer for the whole Church. This is why my step is not an escape, but precisely another way of remaining faithful to my ministry ».

Now it is silence. For seven years, Joseph Ratzinger has prayed and is silent. They tried to contrast him with his successor, without success. Prayer and silence. He said one day that «we must prepare for death». And again: «In the slow waning of physical forces, inwardly I am on a pilgrimage to Home».
He fought the good fight, he kept the faith: his and ours.