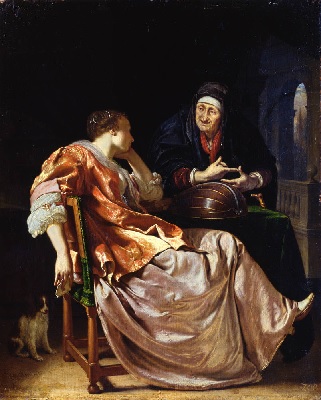 We met two women who influenced David's life in some way. Today I present to you Bathsheba who led him to the grave sin of murder. If Abigail embodies wisdom, the story of Bathsheba unfolds under the sign of passion.
"One late afternoon, David got up from bed and walked on the terrace of the palace ... he saw a woman taking a bath: the woman was very beautiful in appearance". Thus is introduced the story of David and Bathsheba, the woman who made the king elected by God go out of her mind as shepherd of his people, Israel. The author sadly recounts how the king abandons all consideration of loyalty, honesty and common sense, determined to have that woman. He uses his power as a king, forgetting that he has been chosen by God as an instrument of justice.

The passion that upsets David seems not to have touched Bathsheba who, with simplicity and without comment, responds to the appeal of the king who had sent for her and follows her messenger, who has come to pick her up. The story is bare and essential: «She went to him and he lay with her. She then she went home. ' When she realizes she is expecting a child she "sent him to announce to David." She doesn't go personally, but she entrusts the secret to a messenger. A few words outline the behavior of this woman who certainly must have been scared, she was alone to face her own fear and shame. "I am pregnant": a cry of alarm, a request for help from the king. Her betrayal becomes evident, it is necessary to get rid of that child, making him appear the son of Uriah, the woman's husband, whom the king invites with repeated proposals to lie with her. But with a series of reasons dictated by honesty, Uria refuses. David has no choice but to have him die. The king of Israel blessed by the Lord who has been promised a royal lineage, the Lord's anointed, becomes a murderer.
But "the thing that David had done was evil in the sight of the Lord" an evil that has death in it. In fact, the child who will be born will die. We know nothing of the impact of this tragedy on Bathsheba's heart while we know that this suffering, read with the help of the prophet Nathan, guides David on the difficult path of becoming aware of the evil done that leads to the encounter with the God of mercy. who forgives him, giving him another son: Solomon, a name that carries within itself the promise of peace (Shalom).

It is the definitive sign of God's forgiveness, also ratified with the addition of another name: Iedidià, loved by the Lord. He is entrusted with the beginning of a chain of generations that will lead to the Messiah, that Son of David who will save the world. Bathsheba, who had hitherto appeared taciturn in the love story she lived with David, reappears next to him "very old" (1Ki 1,15-31) transformed into an iron woman, committed to managing the succession to the throne of son Solomon, usurped by Adonia, his half-brother. We conclude with a sentence from Victor Hugo: "Every man in his night goes towards his light".