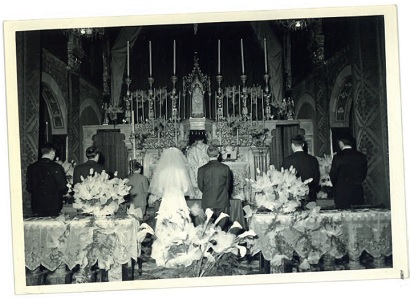 Almost 50 years have passed, as fast as the water of a river that now flows from its source and tomorrow is already in the sea. 50 years of dreams, hopes, joys, but also of fatigue, errors, misunderstandings. The Lord has given us great gifts and accompanied us. We dreamed. Normal dreams: a family, children, work, maybe what we were prepared for, a social life aimed at building a better world.

We were immersed in a culture, that of the early seventies, marked by both international and local events. The cold war posed many questions about the future, the Vietnam war had shaken consciences, disputes of '68 they had influenced youth culture for better or for worse; it was the moment of the "fantasy in power" but also of the erosion of ideological, moral and religious certainties. The workers' statute had seen the light on May 20, 1970 and this too would have allowed our generation to have a more serene career path, far from the jungle of today. The Second Vatican Council sought to be applied and in particular on young people it had left profound signs: having put "the people of God" in the foreground and giving dignity to the laity had triggered the desire to commit themselves to struggle and build a better world. It is no coincidence that the Sermig founded by a layman was born in the wake of Vatican II. So we moved between lights and shadows, between big dreams and worries.

We had faith in life, we were passionate about the invitation that Raoul Follereau had launched at a meeting in February 1972 organized by Sermig. In a heated and peremptory voice he had said: "bâtissez des cathedrals", build cathedrals. The story of the pilgrim who was going to a place where a cathedral was to be built came to mind. Along the way he had met three stonecutters who he had asked what they were doing. The first replied that he was killing himself to work, the second that he worked from morning to evening to support the family, the third, naturally destroyed by fatigue like the others who did the same job, said proudly "I'm building a cathedral" . As if to say that with what you have and what you are there is the possibility to face life with confidence or to suffer it without enthusiasm.

Even today young people dream, they too live in a situation of lights and shadows, but for them it is certainly more difficult even if they have mobile phones, live on social networks, have the possibility of communicating, unlike we who wrote letters to each other when we were distant and not reachable with landlines. There was an advantage: you had to dig inside yourself to come up with the feelings and words of love to convey. As we approached the end of our studies we found ourselves at a crossroads: to wait a few more years to get married, taking into account the 15 months of military service still to be done and the time to settle down in a job, or accelerate by anticipating the marriage. We chose the second route because we had as a parachute that I, Nietta, was working, I, Guido, who graduated a week before getting married, waiting to leave for the military every now and then I had job opportunities.