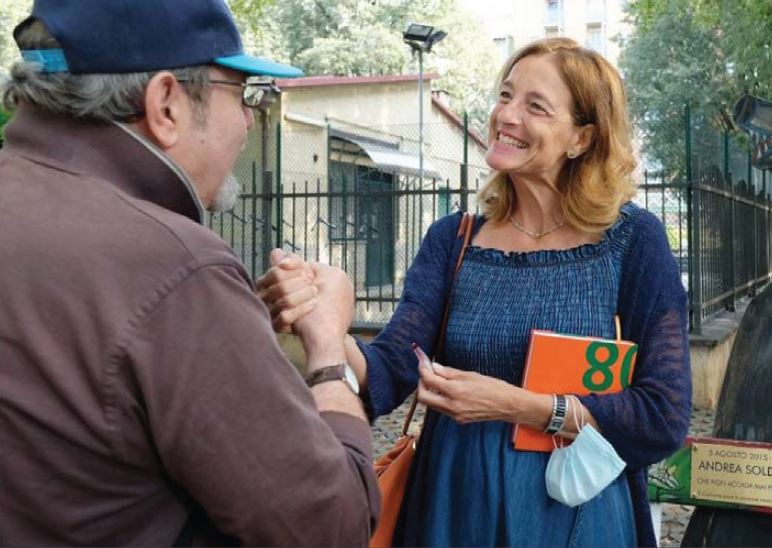 On 5 August 2015 Turin is very hot, some are already on vacation, others are looking for some air in the neighborhood gardens. Andrea Soldi is also sitting on a bench, but that is “his of him” his bench always, in every season. There he takes refuge when his thoughts assail him, there he finds comfort and feels at home. Andrea has been suffering from schizophrenia for years, his mother, father and sister are his support and Piazza Umbria is the place of his heart. He is forty-five years old, he is not violent, he has never been dangerous, and yet, that August 5th he will die due to a compulsory health treatment carried out by some traffic police and medical staff. After his death, the Soldi family found some pages that were Andrea's diary in which the very lucid transcription of suffering illuminates the psychological path and the silences that had enveloped him for years.
This is the ideal letter that Maria Cristina Soldi wrote to her brother.

“Sweet little brother, I've been wanting to write to you for a long time. It is true that I always talk to you, but writing is something else. When dad told me he had found your unsent letters and your diary, it was a very strong emotion. It was as if you wanted to communicate the great good you wanted us, but above all the total love for life, even if she had not been very generous with you.

You never sent those letters. I wonder why? Maybe your love was so strong and clear it didn't need words. Today from where you are it is more difficult to hug us and your words have become very precious because they support us when your lack is strong. In your diary there is all your suffering, but also acceptance, the willingness to welcome life as it presented itself to you. Schizophrenia was your ordeal, but you never ran away! When you weren't struggling with hallucinations you were always smiling, I never saw you angry, except when the rights of the most vulnerable were trampled on. Life for you was a precious gift that was not wasted.
Behind mental illness, there are men and women, with their intelligence, sensitivity, emotions: people who need to love and be loved, just like each of us. There are thousands of families, often abandoned in their homes, unable to act, left alone to wonder about the responsibilities they do not have. How many times have we wondered if we had something wrong with you.
But in doing so, we felt even more alone.
Andrea, after so many years I can say that you needed drugs, but above all doctors and professionals willing to listen to you, reference points to which you can entrust your pain. What you suffered was recognized by two sentences: on that bench they made you suffer so much that it led to your death and no one did anything to stop that torture.

Today your bench has become a meeting place for kind and fragile souls. And even those who are stronger are not indifferent. Those who pass leave a flower or a poem in front of the image of the wolf that so much resembles you and fascinated you. It gave you courage to imitate him, as if the wolf were stronger than your hallucinations. I like to think that that howl was a sign of freedom to give voice to those who didn't have one, first of all to yours.
After your death, I came across the example of many associations that help sick people like you. I still have in my eyes what happened during an event we organized in front of your bench. A sick boy, of rare beauty, was lying on the ground. Any of us would have told him to get up immediately and instead his educator, attentive and sensitive, lay down next to him, smiled at him and after a few minutes they got up together.

Or, I remember the emotion I felt some time ago watching a film dedicated to you and other fragile people who are no longer with us. Patients and educators recited together, each with its own specificity, in full harmony, in absolute respect for the dignity of all. Likewise it was wonderful to see guys like you working in a carpentry workshop. I saw them happy, serene, satisfied.
Dear Andrea, unfortunately, it is all that you have been missing and that no one has helped us to give you. Because this is what you would have needed, someone willing to tell you delicately: “I am by your side, I listen to you, I do not judge you, I do not want to change you. I just want to accompany you on your uphill road ”.
Now, I'm asking you. Stay close to me, guide me from up there, so that my life has meaning and is not wasted. Every now and then hug me tightly as only you know how to do. And I, I promise that I will smile ... ».