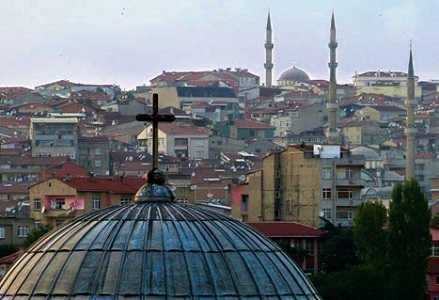 Brotherhood, we know, is an essential theme for Pope Francis, evoked since the day of his election, when bowing his head in front of the crowd gathered in St. Peter's Square he expressed a wish: "We always pray for each other. Let us pray for the whole world, for there to be a great brotherhood ». Many times, in the year and a half between the Abu Dhabi document, Human Brotherhood. For world peace and common coexistence of February 2019 and the very recent encyclical "All Brothers" published on the feast day of St. Francis of Assisi, I was asked if these pronouncements by the Pope have changed the gaze of Turkish Muslims towards me and towards our Istanbul community.

I had to remember that both documents went practically unnoticed, a distant echo for insiders but, at the same time, if we look closely at the content of those writings, the big question is not so much knowing them as a reference bibliographic, how much to rewrite them in everyday life. The theme is really crucial and relevant! A fascinating challenge that constitutes the very meaning of our being in what Pierre Claverie defined as the fracture lines of humanity. It is clear that, where we live, the priority commitment in defense of the sacredness and human dignity is a common currency in our relationships, and this regardless of our religious or denominational affiliations.

To most it may seem like a romantic discourse, decidedly optional insofar as you either feel largely self-sufficient in your own world or, on the contrary, excessively threatened and conditioned by fears that recommend preventive closures and defensive entrenchments. In both cases, I believe there is a worrying deficit of realism, enormous limits in the interpretation of the complex time we are going through.

At certain latitudes, the signs of what Pope Francis has repeatedly called a "change of epoch" are perhaps more evident and, above all, the eye is more trained to see its consequences on everyday life. What the pope tells us is that the Church is not there for herself, but that she is there to create fraternity, to "go towards" and this not out of paternalism (which could easily be associated with a sense of superiority) but because we say believers in a God who loves his creatures without distinction. This means that we are called to build fraternity, even with those who believe differently (or who possibly do not believe at all), not because we are good but because God is the Father of all! If we understand this, brotherhood cannot have limits for us and, much less, it can be a limit: it is breathing to the rhythm of God's breath and living the true "catholicity" of being Church, catholicity without conquering arrogance but full of benevolence . Within this perspective there are two other immediate findings.
The first is that the construction of a true "fraternity without barriers" implies overcoming the simple factual pluralism: being content with living in a planetary society as a setting for a multiplicity of perspectives
irreducible people who live together in a non-belligerent way, but ultimately also mutually indifferent. From the perspective of universal brotherhood, I am made responsible for the joy of the other, without however making him hostage to my interest.
A second observation is that there is no theology (a well-founded discourse on God) that is not rooted in a solid anthropology (a serious discourse on the human being and his sacredness). Religious convictions regarding the sacred meaning of human life allow us to recognize the fundamental value of common humanity, in the name of which we can and must collaborate, dialogue, forgive and grow, building daily proximity.

For those like us who live in the heart of an "Islamic ocean" this is also the main way out of the catacombs of the "confessional entrenchment". In this harsh time of global pandemic, we see it daily in the "landing and neighborhood meetings" (mouth mask), in the accentuated attention to supporting the elderly, unable to leave the house in their essential purchases or even giving up at certain times of the day the use of a small private garden to invite the young Turkish or African family to let the children run around for a while, put to the test by the interminable confinement in the four walls of the house. Of course, truly believing in a common vocation to universal brotherhood implies the revolution of our outlook on the world: from economistic to mystical. It's a long way and we're only at the beginning.