A matter of image 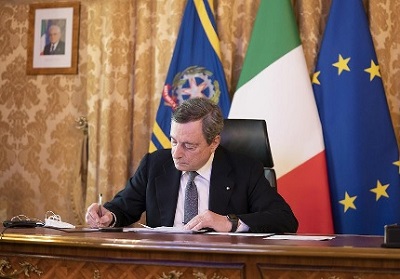 Pay attention to us, it is a sequence of a few seconds that the national Tgs, in particular Tg one, reproduce almost constantly in every report concerning the Prime Minister. It is certainly part of the "official images" disseminated for use and consumption of television newspapers by the staff of the newly elected Prime Minister but, if at the beginning of his mandate this with very few others was part of the only repertoire of Dragons in his new role, this particular sequence has lasted over time and has become a sort of iconic brand. Fixed shot, specially slowed-down image, the top of the presidential desk limiting the field below, Dragons in the foreground intent on reading some sheets, forearms artfully placed on the sides, Bic ballpoint pen in the right hand, tie with very small elegant polka dots, blue jacket impeccable, the tricolor completes and enlivens the background. It is not a "stolen" image but technically constructed, posed, in which every element that composes it is scrupulously studied starting from wanting to immediately imply and communicate a surprise (artificial) effect, in fact the president does not look at the camera he aimed at. in front but quietly reads (pretends to read) the sheets in front of him, he seems to ignore the circumstance, absorbed in his presumed careful reading almost does not want to give himself to the lens, he has no time to waste in pursuing his image overturned in millions of screens at home ... He wants us to immediately understand that he has much more important things to take care of, things that concern us directly and that we are happy that someone finally takes seriously instead of spending time chasing and indulging in the television sirens as they almost do now all our own politicians.

The first impact of this image that seems to ignore us is therefore that of communicating the seriousness of the person, of those who do not need to sell themselves in the limelight to gain approval, of those who, at the risk of appearing opinionated, think about working first. A few moments later, in slow motion to emphasize the gesture, the president raises his gaze and looks straight at us, he is at the same time present and detached, he wants us to clearly understand that he is doing it because he must, he allows himself and grants us a small distraction that it weighs on him but he knows it is necessary, he looks us straight in the eye… he is there. A long moment before looking down and continuing to work. At the next cut, the swirling river of the other images begins to flow again, but the iconic stillness of that short anomalous slow-motion sequence captures us. In a matter of seconds it encompasses everything, personality, program and dedication ... exactly what most of our representatives who we stubbornly continue to vote for are missing.