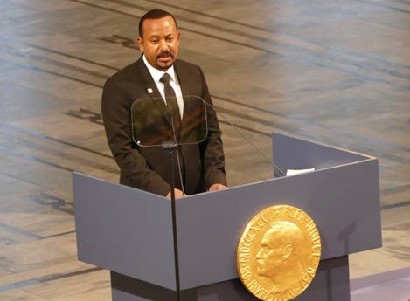 It is always a defeat to see a Nobel Peace Prize winner declare war. It is a contradiction in terms that mock the hopes of those who sincerely believe in peace and disrespect the victims of war, a betrayal of those who should help the humanity to ban violence as a tool for conflict resolution. At the end of November, the 2019 Nobel Peace Prize winner Abiy Ahmed, Ethiopian premier, did more. After a year of civil war fought against the northern Ethiopian region of Tigray with every weapon - including the massacres of civilians, mass rape, the blockade of humanitarian aid, in defiance of the law that governs the war - he declared on social networks that it would be went to fight at the front.
We also lacked the Nobel Prize in front of the collection of errors made over the years by the Oslo Committee which chooses the winner every year and which has dealt deadly blows to the credibility of the award. In the case of the African Nobel, the first of the Horn of Africa, we are certainly talking about the most discussed and questionable in the history of the award. The touchy (few now) fans of the premier who had deluded the world of being a champion of civil rights, like to remind those who contest him that the prize was awarded to him by the West, that he did not ask for anything. But it is appropriate to remind them and those who do not know that with the prize the winner not only gains world fame, but pockets a rich check for 900 thousand dollars and a solid gold medal that is worth the same. There are no spending constraints on the sum, but a certain fair play would require that a foundation or a peace study center be set up at least to keep up appearances. Not that war was declared even a year after receiving the prize and check and going to the front two years later. There is always the possibility of returning the prize and money if you change your mind.

The real defeat in the Ethiopian affair, beyond who will win the civil war, is for the whole of Ethiopia and for the cause of peace in Africa. Although the Horn is at the center of many interests due to its strategic position, not even a Nobel laureate who leads the most important country in the area can determine a path - albeit a difficult one - of ethnic pacification by fighting nationalisms and localisms. Instead he fed them himself with hate speech on social media (Facebook suspended him) and expelled all critical Western voices, from diplomats to journalists from global newspapers to officials of UN humanitarian agencies and NGOs such as Doctors Without Borders (another Nobel Prize for peace. Deserved, though). All critics are defined in the pay of the enemy, all accused of propaganda hostile to national unity. The spiral is tremendously similar to the Balkan one, when the former Yugoslavia exploded in a few years of bloody war. And everyone hopes that, when the blackout that has enveloped the conflict always at the hands of the premier for over a year is removed, there will be no similarities with the Rwanda of the 1994 genocide.

The Nobel Peace Prize at the front is no joke, it is the victory of death and of the arms dealers who killed tens of thousands of people in this war. Two years ago Ethiopia seemed to have overcome many difficulties and seemed to be launched on the development highway together with the whole Horn thanks to the Nobel Peace Prize. Instead, by choosing the path of war, she has gone back at least 30 years and is condemned to dependence on aid from the West, China and the Arab world for a very long time. Provided she can maintain unity. In the outpost of Christianity in Africa, brought there 1,800 years ago, the Gospel seems to speak in the desert and Christmas will have the face of a child born in the midst of hunger and despair. But it nevertheless comes to bring a hope of peace where it seems impossible to us.