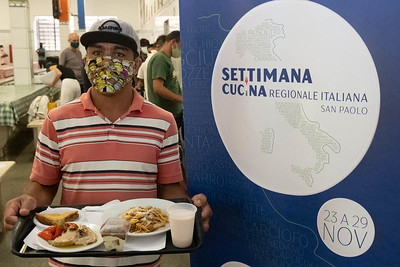 On November 26, 2020, the refectory of the Arsenale della Speranza was transformed into a beautiful Italian restaurant that served hundreds of guests a wonderful dinner with the following menu: Mozzarella in carrozza, Pasta al ragù, Fillet of meat with vegetables and Tiramisu , all prepared under the skilful and experienced direction of the Italian Chef Antonio Maiolica.

The event, aimed at promoting quality Italian cuisine, this year had to take place in a "reduced" version due to the pandemic, but it has undoubtedly gained an extra value by making quality cuisine also an instrument of communion, of friendship and, why not, of hope!

We sincerely thank all those who worked to make the event possible, in particular the Consul Filippo La Rosa and the vice consul, Livia Satullo who during the morning had a nice sharing on the history and traditions of Italy , with our guests in the central tent of the house.