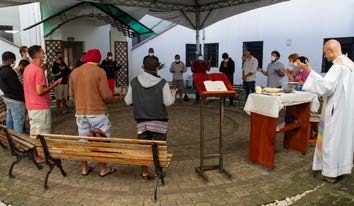 Like every Wednesday morning, we celebrated mass with the guests in the courtyard in front of the chapel. It is a very special moment, it is eight in the morning, the offices and classrooms are still closed, there are those who still rub their eyes, those who, awake, are already thinking about their next commitments and those who hold their hot coffee in their hands, that will accompany him throughout the day. Definitely a long day, full of hitches and unforeseen events, but which thanks to that supply of coffee - and which will be renewed at least six times - will be faced with the usual Brazilian courage.

There is also a need to stock up on prayer. So once a week we find ourselves with about twenty men, a bluetooth speaker for songs, the Word of God and the Eucharist.
Maybe two or three don't really know why they are there, most have received a kind of piecemeal catechesis, some really believe in it and certainly many hope… and this is a good start.

One day we read the Gospel of Simeon and Anna and I was very impressed by a word from Father Simone who was celebrating: "pelo mesmo expirito", thanks to the same Spirit, Simeon and Anna went to the temple that morning, Anna perhaps was always there , but Simeone went there on purpose, pushed, indeed pushed by the strength of the Spirit, sure of having an important appointment.

Then I thought about how different the characters in this scene were and yet all gathered pelo mesmo expirito: the young Maria who perhaps already knew something, she sensed, felt; old Anna, who had prepared herself with fasts and prayers; Joseph, whom I imagine a strong and concrete man, who perhaps began to understand and welcome a son not of him, the son of a Promise, and then the old Simeon, who "speaks" with the Spirit, who listens, gets up and goes .
And when the mind is racing, it's easy to bring it to life in my life.

At the Arsenal of Hope we are 1,200 men, and a few women, we all came to our temple, with different searches, different work, personal and economic reasons, but perhaps pushed halfway through the expiration.

This would be nice, to think and believe that I live like the characters on this page of the gospel, that I am not simply in a workplace, in a foster home, in a bad parenthesis in my life, with the hope that sooner or later I will I will go out.
Think how my day would change if I were right at the Temple, if I made my office, self service, bathrooms my Temple, if I knew that the other 1,199 came here pushed, pushed by something that unites us all, perhaps hope itself.

If I substituted the Word of God, the breath of the Spirit, for those wrinkled eyes, for that coffee that was a little too long; if instead of a series of inconveniences, I found an encounter with people like me, moved by the same humanity, by non-judgment, by goodness.

But would we know how to recognize each other? Like Simeon with Joseph and Mary? Recognize our own Spirit in those who approach us?
Read in the eyes of the other the desire, the desire for hope that he carries with him, indeed that it has brought him right up to here?
But - honestly - what prevents me from seeing the Son of God in a child?