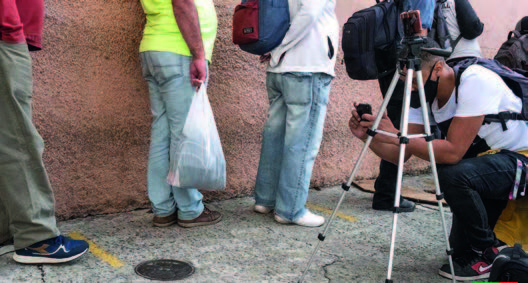 Erica Bernardini, director, screenwriter and film producer of Italian origins, has been involved in promoting cultural exchange between Brazil and Italy for over 20 years. Last year, already at the height of the pandemic, he came into contact with the story of the Arsenal of Hope transformed into a 24/7 quarantine for hundreds of people who would not have had a home to take refuge. He decides to make a documentary of it: Vidas (in) visíveis - um Arsenal de Esperança, presented on the occasion of the 15th Italian Film Festival in Brazil (24/11 - 08/12/2020), under the patronage of the Consulate General of Italy in Sao Paulo, is now available on various digital platforms. We interviewed her.

How did you get to know the Arsenal of Hope?
Through a photographer friend, José Luiz Altieri Campos, who has been a volunteer at the Arsenale for many years. I have always found that place very interesting, with a welcome work carried out by Italian missionaries right where - the Hospedaria de Imigrantes - our grandparents and great-grandparents were welcomed by the Brazilians. The fact that today that place continues to welcome people, also offering them the opportunity to study, professional training, medical treatment makes it a unique experience.

How did you come up with the idea of ​​making a documentary?
It was thanks to José Luiz that in the middle of last year he sought me out to tell me that he and another Milanese photographer, Luca Meola, had had the idea of ​​collecting dozens of testimonies from guests during the period in which the Arsenale della Speranza had been transformed into a large quarantine, exactly from 23 March to 28 June 2020. José showed me some of the photos taken by Luca and several testimonies of men who had remained in quarantine for more than 90 days in that space to protect themselves from the COVID-19. It was an incredible material! Since then I started to deepen, to get passionate about this story that absolutely had to be told. For me, as a producer, cinema is this: a window to tell a story.

What was the idea?
Right from the start the goal was not to tell a story of people with problems, with addictions, sad or lonely, but of people who wanted to be seen, who wanted to tell their story: people with talent, with a profession, people who like they got lost at a certain point in life, but that there they had found a welcoming place, which not only gave them a plate of food and a bed, but a house where there was life, there was hope and a path with a way of exit, a path that is not easy, but possible and supported by an impressive missionary work because when you stop even for a moment to think about the number of meals, beds and everything else it is really about the management of a small city.

You worked in record time ...
Ever since we were convinced that this thing had to be done, my partner, Carla Luzzatti, and all the people who work with me were moved to know what was happening inside the Arsenale. At that point I was able to count not only on the expertise of professionals, but on the enthusiasm of friends who joined their forces to tell this incredible story.

What have you learned from this experience?
I am satisfied with the work done, but above all I am happy for what I have learned, as a human being. Today I can say that for me the Arsenal of Hope is a place where you enter with an "I" and exit with a "we", the I becomes us. I think it is the most important thing I learned during the recordings and I really hope that our documentary will contribute to making many people aware of the incredible work of the Arsenale which gives visibility and dignity to many people who are mostly invisible or despised..

A dream for the future?
I would very much like to bring Vidas (in) visíveis to Italy, we will work in this direction.