In Brazil, the expression "terra roxa" - which is pronounced almost like the word "red" in Italian - refers to the type of soil, with a reddish color, typical of the regions of Paraná, Minas Gerais and Mato Grosso. The expression actually means "purple", while "red", in Portuguese, is called "vermelha", but since the Italian immigrants - who arrived in Brazil en masse to work in the coffee plantations - continually referred to the land " red ”, by assonance the expression ended up taking hold also“ Brazilian style ”. Well, at the Arsenale della Speranza we are creating a small "red earth effect", starting with the expression "Have a nice day".

For the friends of Sermig, the expression Good day not only has the value of a wish, but refers to a daily reflection by Ernesto Olivero recorded digitally and addressed to the hearts of all the friends who are inspired by the spirituality of the Fraternity of Hope.

The story of this message, which today is practically a tradition, begins in 2003, when Ernesto was prompted by a friend's request: "My daughter goes abroad for a period. Could you invent something so that she does not feel alone? ", And he, to be close to this girl, far from the country, invented a daily message which then, conveyed through the official website and other platforms, became a reference in the day of many people.

For a missionary community abroad, such as ours, the work of translation is inevitable: every book, letter, communiqué, poem or prayer written by Ernesto and by Sermig of Turin require a substantial commitment to ensure that these contents become more a heritage for the Italian family, but for all the communities reached by the Sermig Fraternity in the world.

In this perspective, since the first years in which the “Good Day” became public, we have begun to translate and disseminate it also in Portuguese, but sporadically and as a written text. Since 2018, every week, we select one of these reflections, with the most universal content and, every Monday morning, we publish it on the pages of our Blog (arsenalesperanca.blogspot.com).

Little by little, a good number of people began to make this reading a habit and also a way to share the thoughts of the Arsenale with friends and acquaintances. At the end of 2019, the "Brazilian version" Happy Day took the form of a small digital bulletin, immediately available and easy to share ...

But with the advent of the Pandemic it was absolutely necessary to open our "social" doors even more. If the dividing line between the population welcomed at the Arsenale and the upper-middle classes was already very thick, with the pandemic it has become a sort of impassable wall. It is likely that even when most of the population is vaccinated, shelters such as the Arsenale della Speranza will be among the last to which people will return, including our friends, young people and volunteers. The poorest are sadly stigmatized even as the most dangerous carriers of disease, although, to be honest, the coronavirus arrived by plane and not barefoot.

Here one of the insights was to create a podcast, transporting the content of the Good Day to a new distribution technology, in which we give our voice to Ernesto's text - after all, the voice would have brought some of us into homes. of our friends in quarantine.

To do this we involved an audio specialist who, free of charge and with considerable editing work, joins and harmonizes a new episode of about 10 minutes every week in which, in addition to Ernesto's initial message, we have added two other vocal columns: the testimony of someone who is trying to live that particular message and the example of an action of good told in the first person by those who do it.

Every Monday, the "communion" and the ratings increase and the social distancing decreases. Since August 16, the date of the first publication, we have already reached 20 episodes, a small cosmology of audio content, in which even the listeners who intercept us by chance manage to find their way around, recognize the references and fall in love with work and style of a house they have never physically seen.

2020 was a year to learn a thousand things, but also to create new welcoming spaces that show us new ways and, why not, also new languages: the messages that wish us a "Boa jornada" are quite frequent now, an expression that , in Portuguese, is not (wasn't) common at all ...

For those wishing to take a peek, the Good Day podcast can be listened to for free on the following platforms: Spotify, Apple Podcasts, Google Podcasts, Deezer and Castbox. “Boa Jornada”! 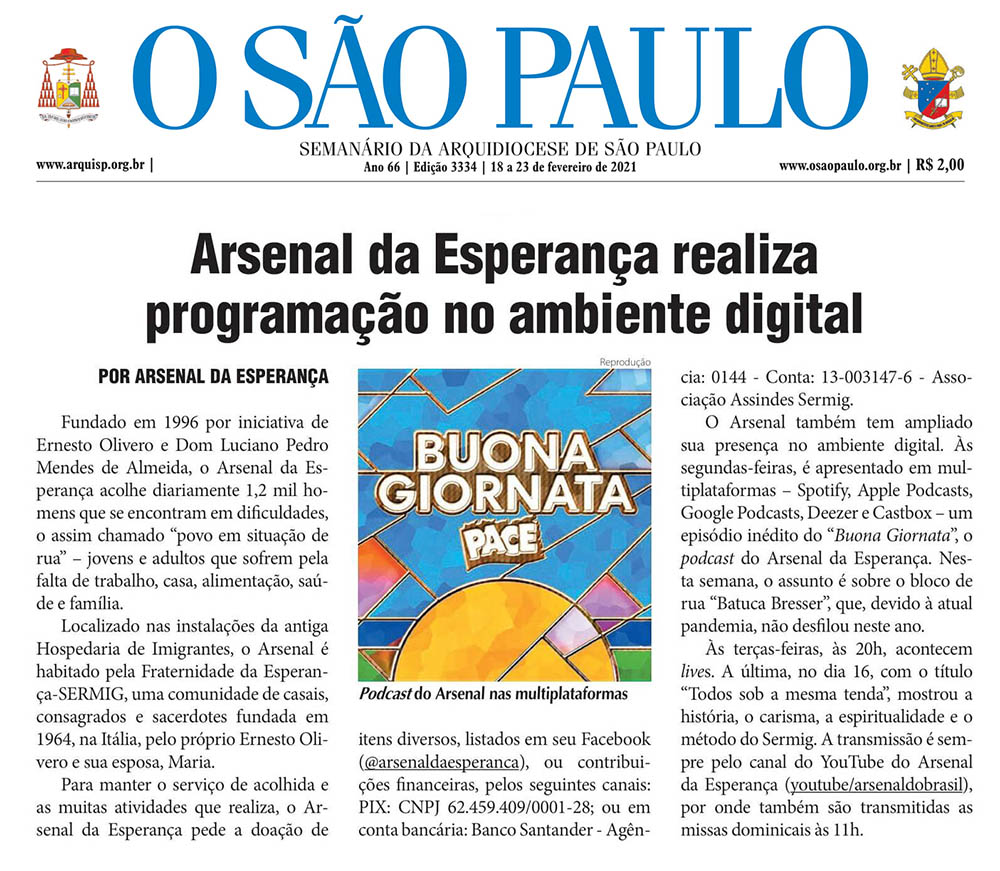