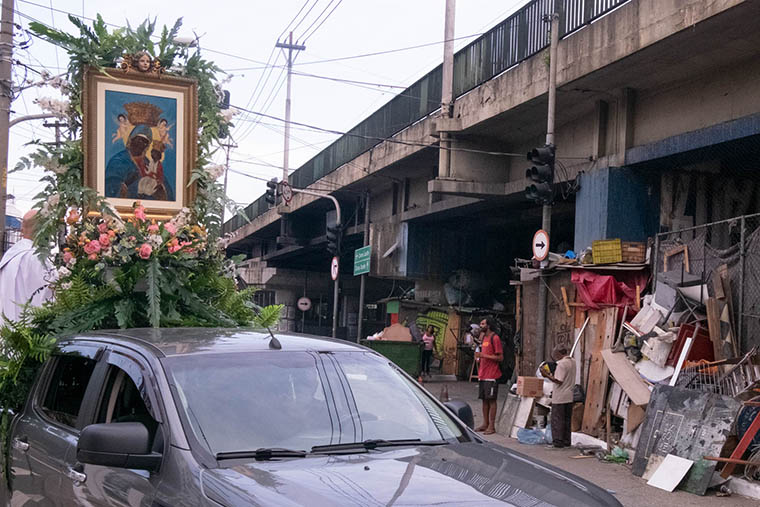 This year, the Parish of Nossa Senhora de Casaluce, one of the two parishes administered by the SERMIG Fraternity in Sao Paulo, Brazil, celebrates its 50th anniversary. The parishioners certainly wished for a very different party, "at the height", to celebrate the story of a devotion and a community that has been present in the historic Brás district for over a century. The pandemic has changed plans around the world and for this community it couldn't be different.

Despite everything, the "people of Casaluce" did not lose heart and, after a long time praying and meeting only virtually (a practice that will continue), they promoted some moments of celebration in a present way: on November 28th, for example, before of the celebration of the Solemn Mass, a procession of cars was formed to accompany the image of the Madonna on a small pilgrimage through the streets of the neighborhood, praying for its inhabitants - many of them forced to live in extremely precarious conditions - and for the end of the pandemic.

Prayers and songs were offered in communion with all those who followed the event from their physical and virtual windows (the entire path was broadcast on the Parish Facebook page). The parish of Nossa Senhora de Casaluce, in its "disproportion" between the forces in the field and the challenges that arise in an area as demanding and full of "poverty" as the Center of San Paolo is, remains firm in trying to be a concrete sign of light and hope for the many people who knock on the door of the parish asking for food and other help.

May Our Lady of Casaluce continue to intercede for us and for all the people entrusted to us!