The seal of Solomon 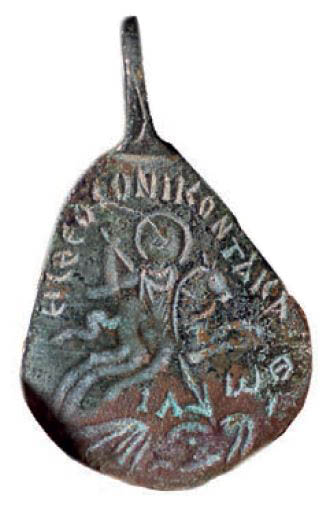 Forty years ago Tova Haviv, one of the first inhabitants of Moshav Arabel, in Galilee, found a metal pendant near the settlement.
In recent months, his descendants have handed over the object to the authorities, which turned out to be an amulet to protect women and children from the evil eye.

The oval pendant has on one side the depiction of a man with a halo on horseback, who hits a woman lying on the ground with a spear. On the upper side appears the inscription, in Greek "The only God who conquers evil" and next to the female figure the Greek letters I A W TH, corresponding to the Hebrew Y-H-W-H, the name of God.

On the opposite side an eye is pierced by arrows and held in the lower side by some animals, next to the Greek inscription "only God".
According to Dr. Eitan Klein, of the Israel Antiquities Authority, «the pendant is part of a group of 5th century amulets. A.D. from the Levant, probably produced in Galilee and Lebanon.

This group of amulets is sometimes called the Seal of Solomon '. The scene would represent the knight defeating an evil spirit, in this case Gello, who was believed to suffocate or kidnap children and women. "The eye on the other side" continues Dr. Klein, "is identifiable as the evil eye, attacked and defeated by various means." The characteristics of the amulet therefore frame it in the Byzantine era, when in the Arabel site there was a Jewish village with a synagogue.

“Although scholars generally identify the owners of such amulets as Christians or Gnostics, the fact that they were in a Jewish settlement containing a 5th-6th century synagogue. AD could indicate that even the Jews of the period wore amulets of this type to protect themselves from the evil eye and demons ».

The IAA thanks the citizens who gave the amulet to the authorities so that it can be studied. In Italy, however, things work differently.
The law provides that anyone who finds an object that could be of archaeological interest should immediately contact the nearest civil authority, such as the mayor or the carabinieri, without moving the find from the place of discovery.