Discovered the house of Jesus 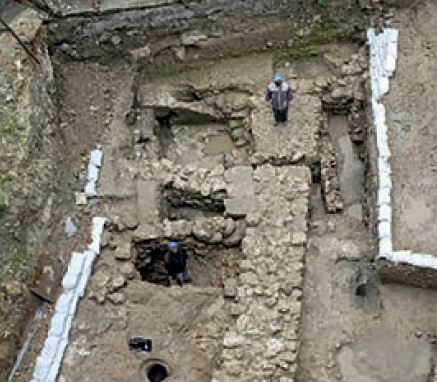 Under the convent of the Sisters of Nazareth, located in the town of the same name, an important find is hidden: what some say would be the childhood home of Jesus.
The first findings date back to the 19th century, when the convent was built, but since 2006 the "Nazareth Archaeological Project", led by archaeologist Ken Dark, has conducted systematic excavations.

Under layers of medieval times, belonging to the period of the Crusades, we find the Church of Nutrition, also described in the Itinerarium Egeriae, a text of the fourth century that tells us about the journey to the Holy Land of the pilgrim Egeria.
Under the church there is a Roman tomb and, after a period of neglect, a house with a courtyard, partially excavated in the rock of the hill.

Inside, archaeologists have found fragments of vases belonging to the early Roman period. Furthermore, the presence of limestone vessels testifies to the presence of Jews. These in fact commonly used stone pottery since it was not considered impure according to the Law.
In a nearby area, another house with a courtyard very similar to the first was found in 2009, belonging to the first century. The succession of these findings allows archaeologists to reconstruct the appearance of Nazareth during the early Roman era. It was a fairly large village, perhaps perceived as a small urban center, a reference point for the agricultural communities in the area.

Can we therefore say that the house of Jesus has been found? Even though Jesus most likely lived in such a house, we cannot be sure that this is it. Not even the presence of the Byzantine church built to protect the oldest site confirms this. In fact, for centuries the memory of the places connected to the life of Jesus was not handed down. Only in the fourth century, following the Christian propaganda of Constantine and the visit to the Holy Land of his mother Elena, many Roman aristocrats began to make pilgrimages to the holy places. Places that in most cases were indicated by local populations without a tradition or research behind them.